The earth rang as Namboole stadium was filled to the overflow and Mandela national stadium shook at 12:30 am last night when Pr Aloysius Bujingo entered the venue. The overwhelming crown amazed everyone including Pr Bujjingo himself as he spent over 9 minutes moving around the stadium to comprehend what he was seeing with his eyes.

After a series of preachers, Pr Bujjingo followed Pr Simeon and Cilia Kayiwa who blessed the believers with powerful preaching. Pr Kayiwa cautioned all those that battle and fight against the HPMI and Pr Aloysius Bujjingo. Pr Kaiyiwa pointed out the fact that those that think they fighting Pr Bujjingo, that they are mistaken because they are instead fighting against the God who is in Pr Bujjingo, therefore they will end up in defeat. 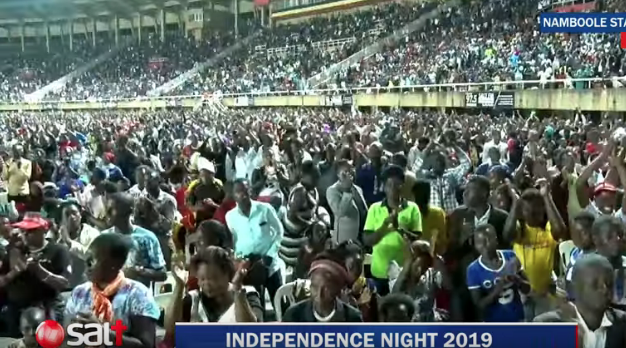 Differing from the usual preaching, Pr Bujjingo delivered his sermon in a very amazing away as he introduced his biological parents; mother and father to the tens of thousands of masses that parked the stadium, the parents prayed a blessing upon him and victory over all his enemies.

More to that the pastor appreciated the president Museveni led government for the freedom of worship that made such a gathering possible, he further communed president Museveni for dismissing the church killer bill the was being smuggled into the constitution by Minister Fr. Lokodo and other religious sect leaders.

In a special way, he appreciated the HMPI pastors and commended the tens of thousands that came from all directions to fill the stadium.

It took roughly 5 hours of prayer without ceasing as Pr Bujjingo prayed for deliverance over the multitudes and closure of all the evil files & reports against them. Likewise believers passionately called upon the name of God and thousands of them surrendered the lives to Jesus and got saved.