Apple sent out invitations on Thursday for a media event next month where the company is widely expected to unveil its latest iPhone models.

The event is scheduled to take place September 10 and will be held at the Steve Jobs Theater at its headquarters in Cupertino, California.
As usual, the invitation didn't provide much insight into what Apple (AAPL) will actually discuss at the event. The artwork featured a modern version of the company's first official logo with the apple divided into floating rainbow chunks. The tagline for the invitation: "By innovation only." 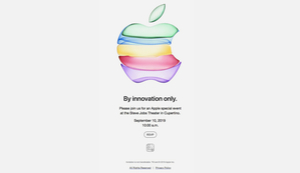 For Apple, the stakes of its iPhone event are always high. More than any other product, the iPhone catapulted Apple to becoming the world's most valuable company at one time and remains its biggest source of revenue. In recent quarters, however, iPhone sales have suffered double-digit percentage declines as customers hold on to their smartphones longer and the company contends with a slowdown in China amid an ongoing trade war.
Among other announcements, Apple is reportedly planning to launch three new iPhones, including two "Pro" models to replace the iPhone XS and iPhone XS Max. The Pro models are said to feature a new and improved camera and video recording features.
Apple apologizes for listening to Siri recordings, promises changes
Apple could also give final details and pricing for its streaming TV service, Apple TV+.
The company has hosted a press event in early September to announce new iPhones in each of the past seven years. But one thing could be different this time: Jony Ive, Apple's longtime design guru, may no longer play a key role at the event. In June, Apple announced Ive would be leaving the company after 30 years.
source: CNN
Whatsapp
Leave your feedback!